fine art by Susan B. Giblin 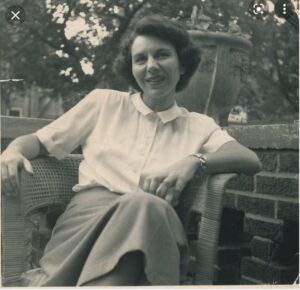 My Aunt Vera was an artist. I always knew she was an artist. I grew up in the 50’s and 60’s. Women, especially married women with kids, were mothers. Maybe they “painted”, but my Aunt Vera was an artist. She was always creating beautiful paintings, prints and collages. When rheumatoid arthritis took the use of her hands, she turned to photography. She was always working on something. During the 1930’s and 40’s she worked as a copywriter for J. Walter Thompson, the largest and one of the most prestigious advertising agencies in the country. As their first woman copywriter, my aunt was a trailblazer. She was forever, her own woman, my inspiration and the reason I recognized my talent and never stopped being an artist. Just like Vera. 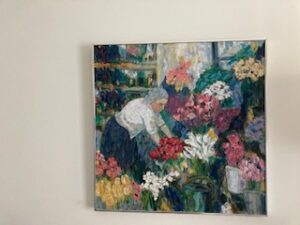 On my sixth birthday, I received a “paint by number” kit. Vera pulled me aside and told me, “It’s a nice kit, but you don’t have to pay attention to the numbers, and you don’t have to color in the lines.” I’ve been creating my own lines and making up my own numbers ever since.

My mother was a mom. She took care of us, worked with various women’s organizations to do good things and was constantly my father’s supporter. She was no Aunt Vera. At least for quite a while, I thought she wasn’t. 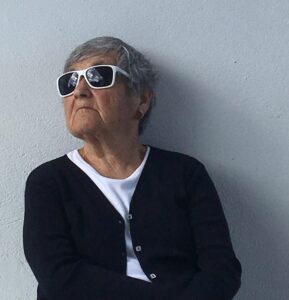 When I started this timeline, I asked everyone I knew to send photos of any of my work they might have. The older the better, pre Smartphone. Two photos which were sent by my brother brought the realization that, like Vera, my mom had a profound influence on my work and my life.

My mother always believed in me. She was always there. Where Vera was my vision of what I could be, my mother was the one who believed I could be. Everything I created, she loved, every chance she had, she would promote me. She was so proud of me, everything I did, she displayed, framed or hung. 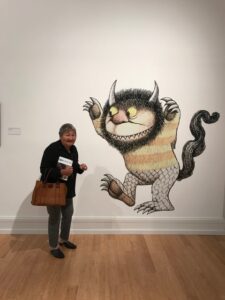 She also was brilliant, a civil rights activist in the 40’s, got her Masters Degree when she was 38 while raising three children, working and still taking care of a home, working doing good things and supporting my father. When I was younger, I didn’t see how much she influenced my life as an artist, as a woman.

My mother is 90 now and suffered a stroke. She can’t communicate but can understand most things we say. I sold three paintings last week. The first person I called was my mom.

I can’t remember not doing some kind of art. Unfortunately, I don’t have a lot of photos of my very early works. Though, I am sure if I dig through my mother’s boxes in storage, I would probably find photos stuck to photos of a good deal of my first artistic attempts. My brother did though, happen to have two of my pieces which my mother framed, from back in the early 60’s. 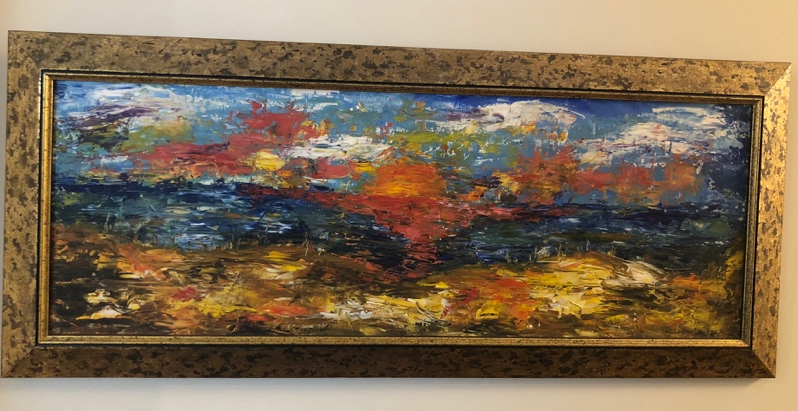 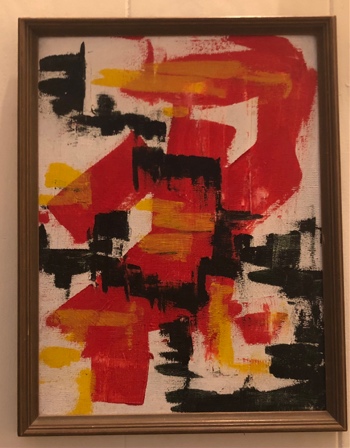 At 70, my memory is spotty at best, but the smell of old paper has, for me, sparked recollections of one of my most prolific times, with respect to my artwork.

When I started thinking about putting this timeline together, I needed to find samples of my work. That’s harder than you might imagine. Again, I’m almost 71 now, I’ve been seriously working at my art forever and I am not someone who collects things. My current home is 675 square feet and I also live in a 30 foot motorhome part of each week. So, I keep my things at a minimal level. I do, though, have a storage space. It holds old furniture, a great deal of my mother’s boxes of photos and papers and items from as far back as the 1930’s, my guys tools, golf clubs, fishing poles, surf boards and luckily, a box of old sketchbooks dating from 1969 through the mid 70”s. These are the years which were really the beginning of who I became as an artist. These drawings are the birth of my “style”, the way I have been creating art for the past 50 years. 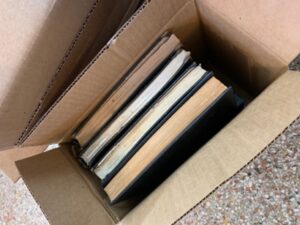 As I looked through these books, there was a recurring theme. I like to draw and I’m pretty good at it. In these books I found sketches for paintings long gone. I found memories from my years in college and when I was just starting to really flex my artistic muscles. I realized how much I loved drawing the human figure, nude or dressed. The recurring theme was the drawings. Always the drawings. 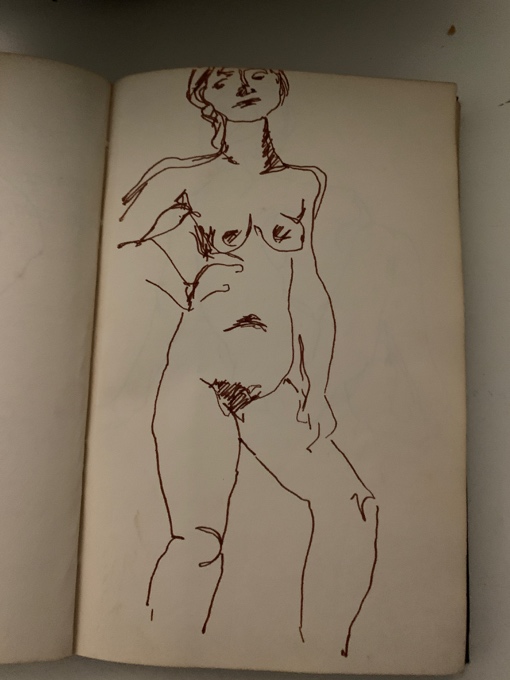 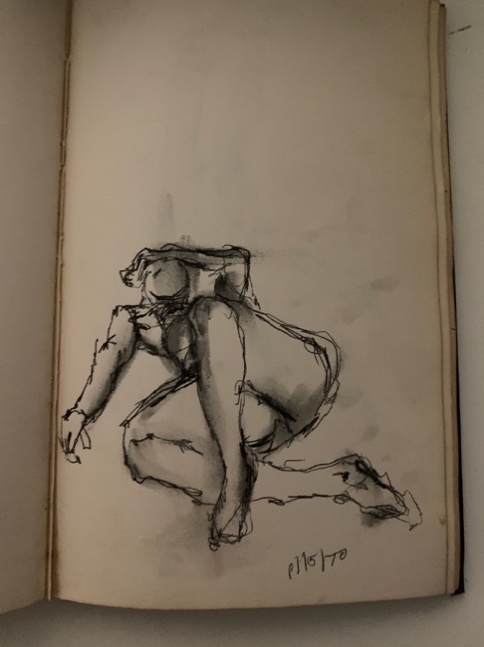 These next photos are sketches from college, some of which were the beginnings of paintings. I’ve included drawings from my years as a stained-glass artist and of a few special paintings. There are also early sketches of my two oldest children, Fran (Fanny) and Anna, their toys and baby furniture. Somehow the youngest, Brendan, missed out, though I have a sketch he posed for, “nude in a red hat”, poor kid. What a good sport. I can’t locate the painting; I think it’s in Orlando.

I never failed to embarrass my kids, sketches of nudes all over the house while they were growing up drove them crazy. They never failed to be my best critics and most ardent supporters. 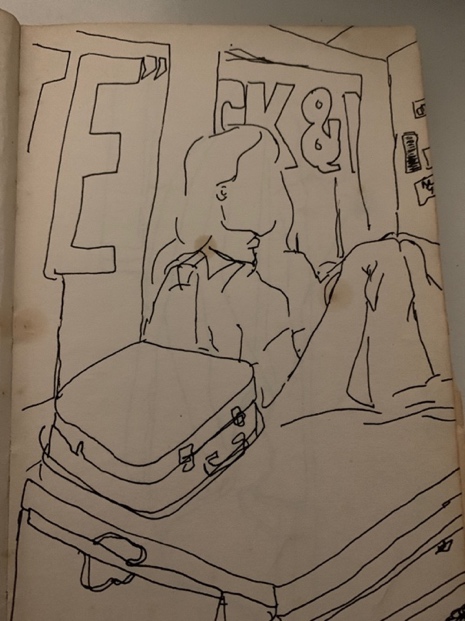 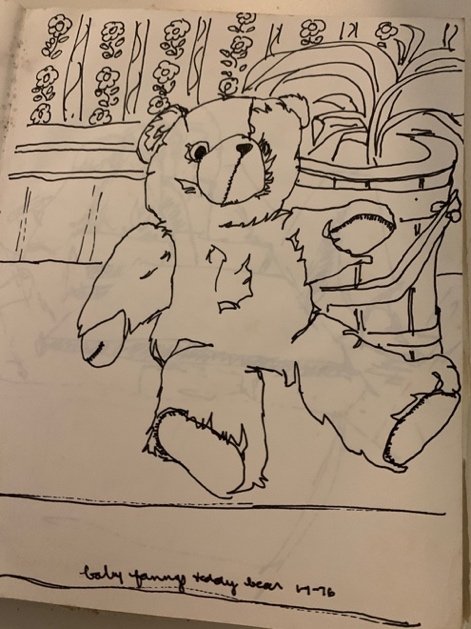 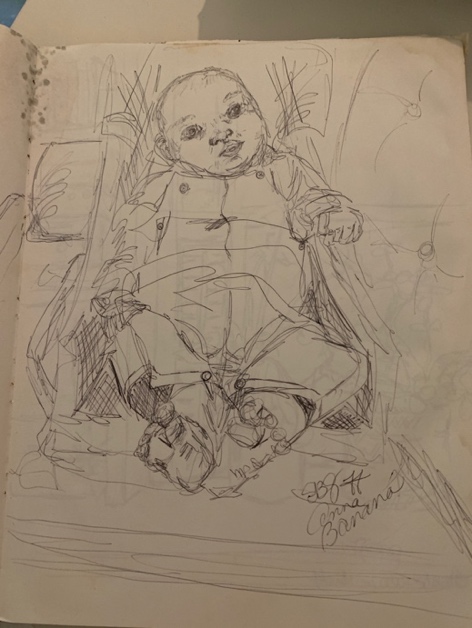 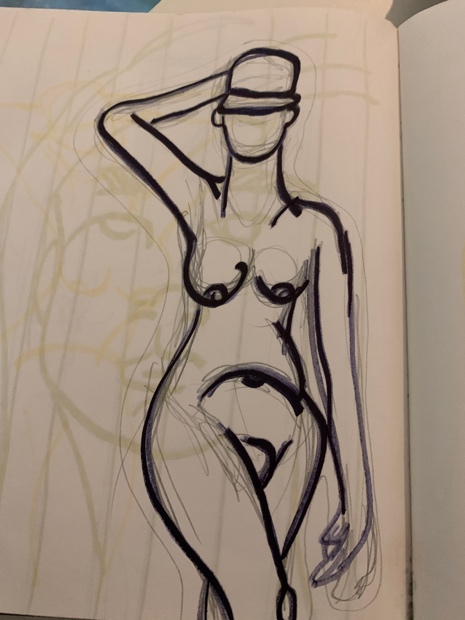 Lately I’ve been experimenting with a type of pointillism, lines, small circles, painted in with vivid colors. These paintings reveal the way colors play together to give the illusion of depth, hard edges and texture. They also show how proximity of objects can shade a shape and how the juxtaposition of two colors affect their intensity and hue.

There’s an interesting story about how I found this technique. In 2016 I opened a gallery in Melbourne Beach Florida. This is a little beach town on Florida’s east coast. In order to make sure I could make the rent, I offered classes for young people. One of these classes was a Young Masters class focused on Impressionism. Prior to any class, I would take the children through the gallery, explaining gallery/museum etiquette and introducing them to different styles of painting; abstract, realism, graphic, impressionistic and my style “coloring book”. When we came to the impressionists in the classes, we studied Manet, Monet, Van Gogh and of course Seurat. One of the little darlings asked me if I could paint like Seurat but using my “coloring book” technique. This is what I came up with:

Figure 11  some of the student’s impressionistic works

Now because of this technique, people sometimes compare my work to Seurat. I do not do pointillism. I paint a circle and color in the circles. My style of painting, coloring in the lines on a very very small scale. The difference between pointillism and my “dots” is the depth, vivid colors, hard edges and texture I am able to create by outlining my “point”,

Lastly, for now, one other person has been ever present for the last 30 years, encouraging and supporting me in many ways. Lonnie, my guy, has made sure I have a clear path in which to paint. Both financially and physically, he has not only worked, very hard, to make sure I have supplies to work with but has always assured me a space of my own to continue working. He has remodeled galleries and studios, shlepped canvas, sat for shows and even posed for some paintings. Lonnie has helped me make the last 30 years, my most productive, exciting and fun. Thanks Old Man. 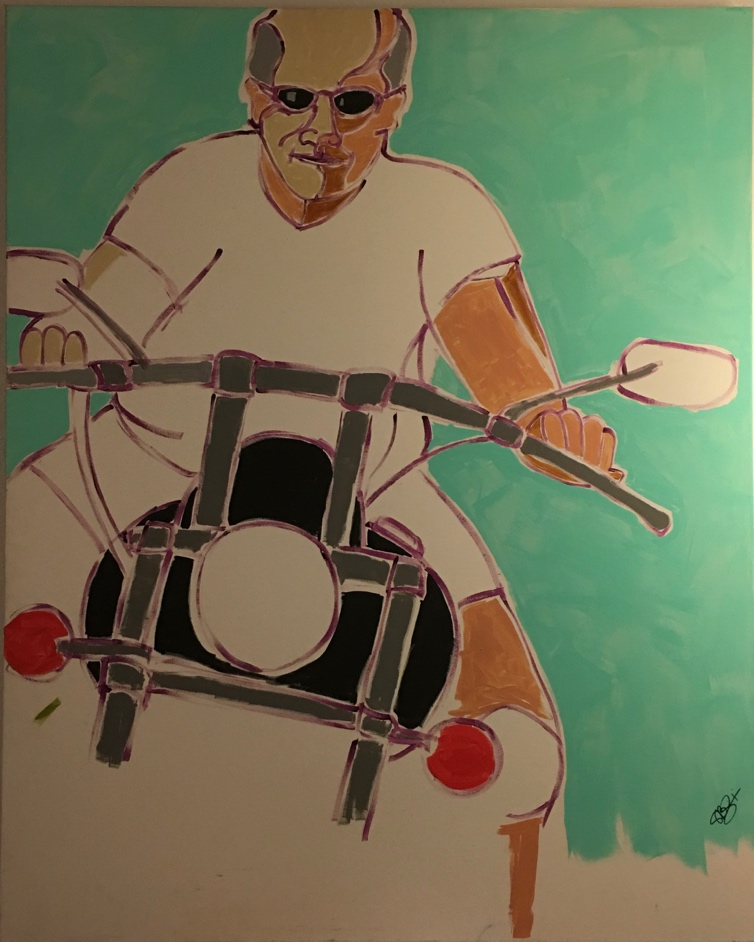